The GR Supra dominates and TRD celebrates at SEMA 2019 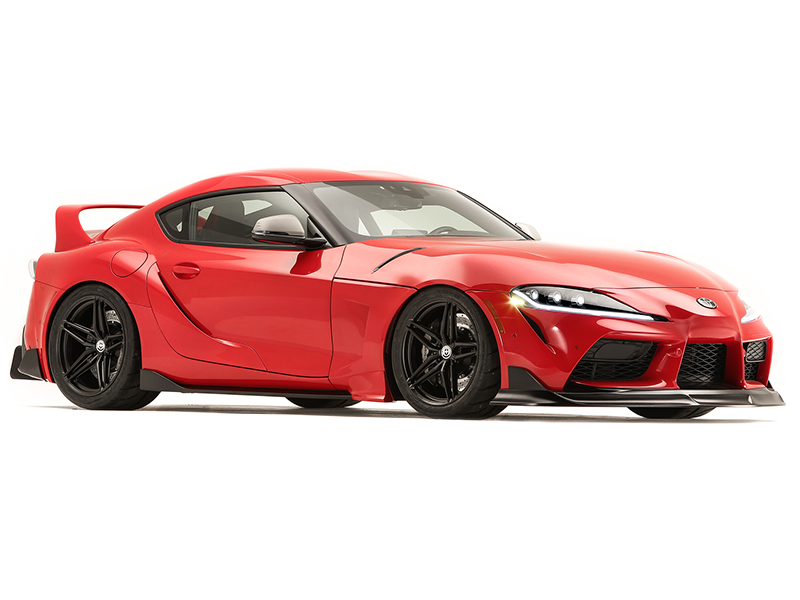 The GR Supra Heritage Edition blends elements of the MKIV Supra from the late-90s with the new 2020 GR Supra. Tuned to produce over 500 horsepower on a stock long block, this homage to the past produces tire-melting performance that complements its new retro-modern aesthetics.

PLANO, Texas – Toyota’s suite of vehicles at the 2019 Specialty Equipment Market Association (SEMA) Show proves that Toyota is committed to performance in every corner. The 2020 GR Supra ignites the show floor with excitement as a dozen examples, ranging from stock to fully race-prepped, light up the Toyota booth in Central Hall. Avalon and Camry TRD sedans join the GR Supras, as they help to celebrate the 40th anniversary of Toyota Racing Development (TRD).

“2019 has proven a momentous year for Toyota and TRD,” said Ed Laukes, group vice president – Toyota Division Marketing. “The eagerly anticipated 2020 GR Supra stole the show when it debuted at the North American International Auto Show in Detroit, and this year marks the 40th anniversary of Toyota Racing Development. From NHRA drag racing and drifting to the NASCAR and IMSA racing series, TRD continues to push the limits of what a Toyota can do.”

Highlights of this year’s SEMA display include:

GVP, Toyota Division Marketing, Ed Laukes and NASCAR analyst Rutledge Wood have a wonderful and competitive relationship. They decided to hold a build off for the 2019 SEMA Show, and they’re each building a 2020 GR Supra. This friendly internal competition is coming to a head as a victor must be decided. Who will emerge victorious in this GR Supra build-off battle?

The GR Supra Heritage Edition was inspired by the vision of GVP, Toyota Division Marketing, Ed Laukes. He tasked Marty Schwerter of Motorsports Technical Center to blend elements of the MKIV Supra from the late-90s with the new 2020 GR Supra. This infusion of style pays tribute to the Supra’s heritage. Tuned to produce over 500 horsepower on a stock long block, this homage to the past produces tire-melting performance that complements its new retro-modern aesthetics.

The GR Supra HyperBoost Edition is NASCAR analyst and broadcast personality, Rutledge Wood’s dream build. Wood, a self-proclaimed Supraphile, expressed his vision for the Supra to his builder, Rick Leos of Lucky Leos 17 Motorsports. They transformed his concept into reality as his aptly named project features a custom turbo kit that more than doubles the output to 750-plus horsepower. A 20-piece carbon-fiber wide-body kit gives this hyper-boosted machine more aggressive body lines with broad shoulders and a menacing stance.

TCD created the 3000GT Concept as a tribute to the iconic TRD3000GT Supra body kit of the mid-90s that was released in celebration of the Supra’s success in JGTC competition. This modern take on that era of racing will stir up feelings of nostalgia among Supra race fanatics.

The Toyota Genuine Accessory Team cast its vision of “a Supra for the masses” and dubbed it the Wasabi Concept. This GR Supra features massive Brembo B-M Brakes, Öhlins suspension upgrades, Toyota forged aluminum wheels and Five Axis aero parts that are sure to spice things up for the enthusiast driver

Gazoo Racing’s Supra Concept hinted at the shape of things to come back in 2018, before anyone knew what the production GR Supra would really look like. The beautiful lines and functional aerodynamics of the GR Supra Racing Concept provided the world with an even better idea of what to expect of the 2020 GR Supra and how a competition model might appear.

The GR Supra GT4 debuted at the 2019 Geneva Auto Show this past March. This concept drew the attention of drivers interested in getting involved in the popular GT4 racing class. Developed by Gazoo Racing, this well-balanced chassis features an FIA compliant cage, racing suspension components, Brembo racing brakes, OZ Racing wheels and a host of motorsports components. The GT4 class is going to really heat up with this turn-key race car!

The Supra built for the NASCAR Xfinity Series has enjoyed great success in its first year, and currently, Toyota development driver, Christopher Bell, holds the top spot in the driver standings with his No. 20 Supra for Joe Gibbs Racing.

With the Supra competing for the first time in NASCAR, what better choice than a GR Supra to serve as Pace Car? This machine features TEIN coil-over suspension, Project Mu brake pads, HRE Forged P101 Monoblok wheels with Goodyear Eagle F1 Asymmetric 3 tires, and a Whelen LED light bar. After making its appearance at the Toyota booth in Central Hall, it’s being whisked away to the next race in Phoenix, Arizona at ISM Raceway.

To commemorate the 40th Anniversary of TRD, the new sport-tuned Avalon TRD and Camry TRD models are displayed by the TRD Performance Wall. These models feature track-inspired suspension, brake upgrades, aero, and more for spirited driving while maintaining the comfort and streetability for which they are famous.

The Avalon TRD Pro Concept celebrates the 40th Anniversary of TRD by shattering the perception of the family sedan. Dan Gardner Spec (DG-Spec) transforms an Avalon TRD into a Pro Concept. MCS adjustable coil-over suspension and Progress rear stabilizer bar and camber arms lend to tack-sharp handling, while a Stoptech brake upgrade reigns in the speed.  Power is enhanced by a DG-Spec/Burns Stainless 3-inch exhaust and cold air intake. A bespoke DG-Spec vented carbon-fiber hood helps with heat management while a duck bill spoiler adds 100 pounds of downforce at 100 mph on the track. At the Streets of Willow in Rosamond, California the Avalon TRD Pro Concept recorded a scorching lap time of 1:25.3, proving that this is not your dad’s Avalon. 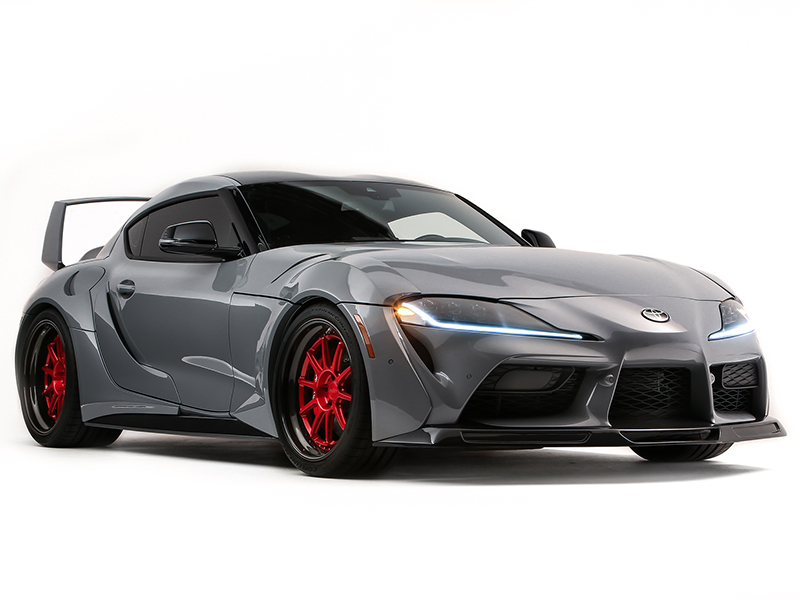 The GR Supra HyperBoost Edition features a custom turbo kit that more than doubles the output to 750-plus horsepower. A 20-piece carbon-fiber wide-body kit gives this hyper-boosted machine more aggressive body lines with broad shoulders and a menacing stance. 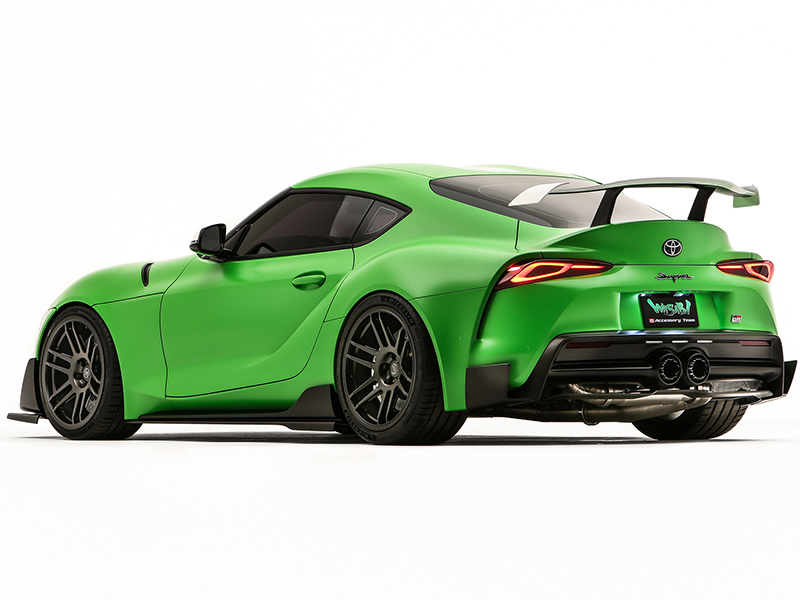 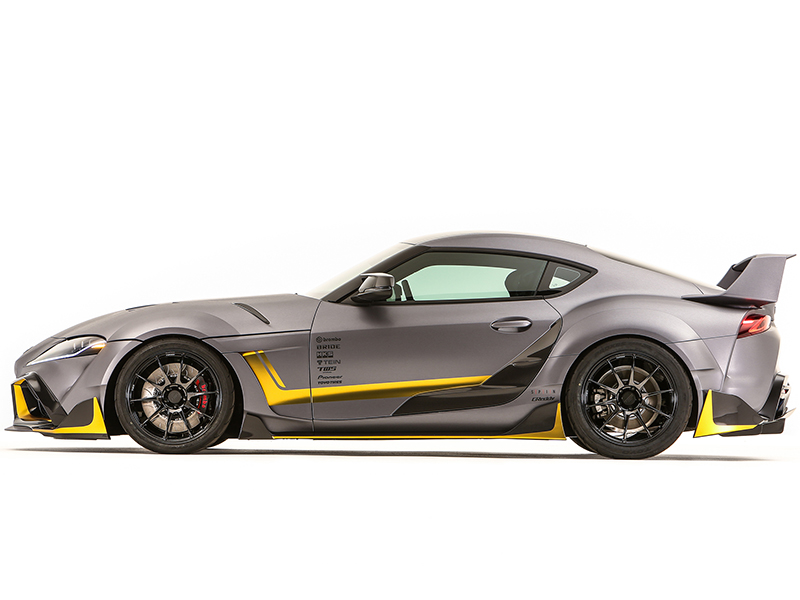 Toyota Customizing & Development created the 3000GT Concept as a tribute to the iconic TRD3000GT Supra body kit of the mid-90s.
Back to Announcements